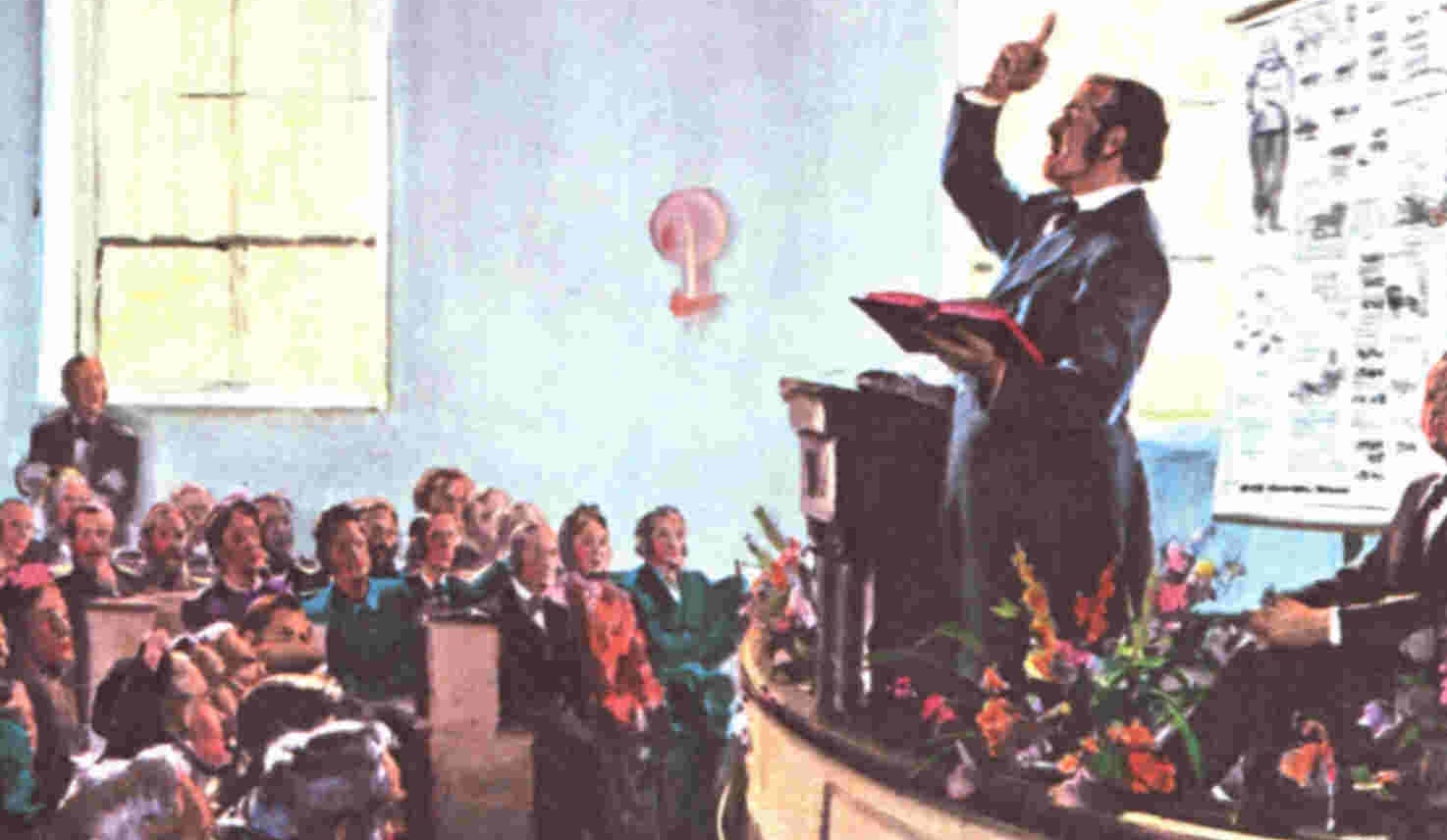 No my friends, this isn’t about the Cult of the Nazarene, which Paul was accused of leading. Rather, this is about something much deeper. I want to address the snake in the grass, and the Doctrines of Demons many have fallen victim to.
The unfortunate thing about these groups, and the group in particular I wish to address, is that a few of their founding doctrines are found in the Bible, yet commonly rejected theological standpoints which are critical to knowing God in his fullness, the epitome of telling half the truth, in order to teach the people lies..

“Non-Essential Doctrines,” are just that, “Non-Essential.” Meaning believing or denying them is not what your salvation hinges on. You don’t have to believe in soul sleep, or annihilationism, nor do you have to abstain from pork to enter into the Kingdom of Heaven. Cults are a particularly sticky subject matter.. When we think of a “Cult,” you probably think of Men in Robes preforming some kind of mock sacrifice to a giant stone owl.. But the reality of it is, even a lot of cult leaders don’t even know they’re leading a cult.

One of the telling signs of a cult is the “You need us in order to receive your reward,” Mentality. You may then ask, “Doesn’t that make Christianity a cult?” Well, we never told anyone that they need us or our building specifically, rather, we’ve told the world they need Jesus. But later on, did in fact, come a people who (probably in good faith) felt the need to separate the wheat from the tares, and in doing so, they caused division in the Church by arrogantly bestowing upon themselves the power to deem some more worthy than others for the kingdom of God.

Our story starts on February 15th, 1782 in Pittsfield, Massachusetts, an American Revolution Veteran and his wife gave birth to a boy, whom they named “William.” When William was 4 years old, he moved to Low Hampton, New York. Many may not know, but William didn’t pursue any further education after the age of 18, he would be seen in modern times, the same most people would see someone with a GED. Later, the War of 1812 broke out, and William spent a majority of his military service as a recruiter for the war.

As many leaders, William Miller became a Freemason, and was associated with the organization until 1831, when he supposedly resigned his Membership. My personal opinion is that he wished to create the appearance of distance to avoid anything that may damage the reputation of the Adventist movement, but you can’t fake your allegiance, when William Miller is buried beside an Obelisk.

Just 2 years after William Miller “left” Freemasonry, he reemerges as a religious leader of a group known as the Millerites, which became what is known today, as the Seventh Day Adventists. Among these, was an aspiring young preacher, Charles Taze Russell, who latched on to William Miller, becoming highly influenced by the eschatology of the Adventist Movement. William Miller was where Charles may have first encountered Masonry, and although Charles rejected the idea of involvement, through what later became the Jehovah’s Witnesses, it’s evident that Russell was highly influenced by Masonry.

Not only was he involved, but he was deep in it. The name, “Rose Ball, (Buffalo, NY)” probably doesn’t mean anything to today’s Jehovah’s Witnesses, but she was a victim of Russell. As a matter of fact, Russell’s first divorce was the result of an exposure to his pedophilia. Upon the trial of this cause, Mrs. Russell testified that one Miss Ball had stated to her that her husband said, “I am like a jelly-fish, I float around here and there. I touch this one and that one, and if she responds I take her to me, and if not I float on to others.” Charles was a Child molester, we would go around from child to child, until he found one that was too innocent to see his persuasions coming. Following the divorce, Russell slandered his ex-wife and she was exiled from the Jehovah’s Witnesses.

During Russell’s leadership, he made multiple “End Times” Predictions which never came true. After the second or third time, Charles blamed the congregations, saying that they weren’t righteous enough to see the return of the Lord.
Here’s a Brief list: 1878 (End of the Harvest), 1881 (a Revised End of the Harvest), 1914 (The End of Human Rulership), 1918 (The New Terminus), 1925 (Resurrection of the Patriarchs, which in all fairness was J.F. Rutherford).

Even the Watchtower Magazine is homes to, famously made by Masonry, subliminal messages. Including things like the cameo of the Greek Philosopher “Antisthenes,” who was drawn listening to Paul speak in one of Watchtower’s Magazines. Antisthenes was the Founder of Cynicism, which greatly influence Stoic Philosophy. Cynicism isn’t just being Cynical. It’s an actual philosophical method of arriving at conclusions by mocking other people’s existence. For Cynics, the purpose of life is to live in virtue, in agreement with Nature, which mankind only interferes with.. Also I may add, that many Greek Philosophers sought to do away with religion as part of “Entering enlightenment.”) Along with cameos, Watchtower magazines bear subliminal messages of Baphomet heads in reflected images, and decaying hands coming from the robes of angels, and demonic faces hidden in the images.

Along with subliminal images in the magazines and sex scandals across the Kingdom Halls, even the content of the magazine is crawling with hypocrisy. What they Preach, is not what they practice, nor what they believe. It is a web of lies used to trap the codependent and confused. In a June edition of Watchtower Magazine (1985, Jun 1_p.30) is says: “The first question is: On the basis of the sacrifice of Jesus Christ, have you repented of your sins and dedicated yourself to Jehovah to do his will? The second is: Do you understand that your dedication and baptism identify you as one of Jehovah’s Witnesses in association with God’s spirit-directed organization? Having answered yes to these questions, candidates are in a right heart condition to undergo Christian baptism.” Just to be clear, “Spirit Directed Organization” is their admission to being a cult, and to them, Baptism is simply a ritual ceremony for an individual to pledge their allegiance to the Organization.
“They [Jehovah’s Witnesses] claim that Christianity became corrupt at the death of the New Testament apostles. They assert that through their religion alone, God has restored the lost and corrupted elements of the Christian faith so that only those who practice their religion possess the purest form of Christianity.” (4witness.org)

Its fundamental to Jehovah’s Witnesses that Jesus is not God, nor is he worthy of worship. They also make it a point that Christianity has been corrupted, so far as to collaborate with the beast itself. Yet they use the name of Jesus, and the power of God, to exalt themselves above others to a place of ultimate control. They preach of good works yet squander any attempt, where they don’t dictate every step of the task. They encourage you saying, “You are free to do good works on your own!” Then mock any attempt to do good. They use the scriptures that could be manipulated to lead people to believe in a chosen leadership; The Watchtower, which proclaims to be the voice of God on Earth. Jesus is worthy of Praise, which is not mutually exclusive to worship. PRAISE IS WORSHIP. So in short, Jehovah’s Witnesses won’t even praise Jesus, rather, there is only contempt when his name is brought up, “He’s not God!” The only people who are angered by the name of Jesus, are the ones who are far from him, and as a result of being far from the Son, they too, are far from the Father.

Jehovah’s Witnesses believe that the Cross Jesus carried is idolatry, they condemn Christians for wearing a necklace as a reminder, as they idolize their good works which benefit the organization. Many of you know, JW’s use their own version of the Bible. The NWT uses “Jehovah” when referring to the Father, as well as contextual changes have been made to minimize the divine nature of Jesus Christ. Interestingly enough, in the 1984 edition of the NWT, in Hosea as well as Malachi, the translators used the term “GrandMaster,” which is a reference to Freemasonry and their rankings. It’s probably important that I note, Charles Taze Russell, the founder of the Jehovah’s Witnesses, is buried in front of the Pittsburgh Masonic Center, his tombstone is a pyramid carven with symbology.