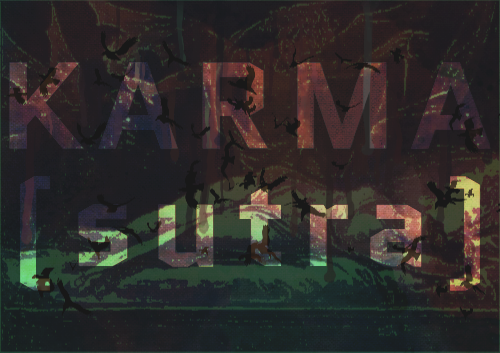 I’m sure you’ve heard the phrase, “what goes around comes around,” or “the universe gives back to you what you put into it.” You know, “Karma” and all that.

One of the silliest things about Atheism to me, is that they’ve almost been longing for the New Age Movement, or something like it, to come around and rectify the conscious qualities they give the universe. They’ve been talking about Mother Nature/ Earth, going through periods of equilibrium to put mankind back in its place, as if it is consciously aware of its inhabitants.

They do the same with another phenomenon known as, “Karma.” Which consciously monitors each person and repays them according to their deeds. But God? No way! God is a fairytale.

It gives me a chuckle, and their deities and reverence for such are of no concern to me. My concern, is the professed Christians who believe in these conscious phenomenons whilst holding to the truth found in the scriptures. When you analyze the doctrines of Demons, it’s no surprise they conflict with the Bible. I mean, they’re doctrines of demons, why would they not fundamentally be the polar opposite of what the Bible teaches?

‘The same destiny ultimately awaits everyone, whether righteous or wicked, good or bad, ceremonially clean or unclean, religious or irreligious. Good people receive the same treatment as sinners, and people who make promises to God are treated like people who don’t.
[Ecclesiastes 9:2]

“Is the concern warranted?” When we look at the first 3 chapters of Revelation, the symbolism of the 7 Churches is pointing to the 7 Church Era’s which were to come. The 7 church Eras are definitely going to be covered in another episode, but I’m touching on this ultimately to segway into the similarities between modern era Christianity, and the Colossians, a church 15km southwest of Laodicea, which would come to represent the last Church era and the final lamp stand.

Paul loved the Colossians, and indicates that they were holy and faithful people in Colossians 1:2, but it’s important to know that the Colossians were under attack by false teachers who were manipulating the gospel and teaching a deficient view of who Jesus was.

There are many great people in the body of Christ today, who are dedicated to the Lord, hardworking, and eager for his return. While, yes, there are disagreements causing division, the body of Christ is by no means ineffective. But certainly, we can admit that we strike a stark comparison to the Laodiceans & the Colossians in that respect. As Jesus warned, there are many false teachers among us, and circling back to what I was saying earlier, this New Age theology has found a bed to rest in and a room to rent in many churches around the world.

Let me just say, that this is no reason to turn our backs on Christ or his people. Do we blame the sheep for being attacked by the wolves? Or should we give the sheep wisdom, that they may know how to defend themselves from the wolves?

You see, this is the reason I tell you these things. If you complain about a problem without proposing a solution, all you’re doing is whining. As we all know, wining doesn’t require a hefty mental capacity. Even a child can look at something they don’t like and throw a fit about it. Even easier it is to ignore the things you don’t care for. But brothers and sisters, this is elementary. The idea that Karma holds hands with the universe to reward or chasten people due to the quality of their deeds is easily refutable.

Jesus says in Matthew 5:45, that the Father causes the sun to rise on both the good and the evil alike, and that he sends the rains to fall on the just & the unjust. The concept of Karma, is that your deeds are paid back in full the extent of your good or evil is returned back to you in full. You can turn on the local News and see stories of John Doe the taxpaying husband and beloved father left in a ditch with a gunshot to the head. Horrible things happen to law abiding citizens every single day.

“Okay Nathan, but why is this fraudulent concept of Karma concerning?”

Easy, because other than being exponentially unbiblical, it robs God of any glory. Have you not noticed? That when bad things happen, to people, they blame a God they don’t believe in, yet when the sun shines on them, they’re quick to grant almost anything else the glory rather than the God who made the sun which now shines?

The world is against its creator, the unjust will only “thank God,” sarcastically when the chips fall in their favor, generally in the context of rain falling on an individual they have strife with.

“Thank God my ex is miserable, Karma finally caught up to them.” That statement alone reveals an asinine understanding of the supernatural. Their reverence is for the universe, and not the creator of the universe, their praise falls short at the 1 yard line, but whatever they have to do to not give attention to God, must be done. Theologies such as this have no place in the body of Christ. What goes around, certainly comes back around, but not in the context of the universe paying you back for what you’ve put into it, but rather, the repetition of history, because we very much so are facing some of the same attacks the Colossians faced. So I would say to those succumbing to the integration of New Age teachings and the body of Christ, the same words Paul said to the Colossians:

“Christ is the visible image of the invisible God. He existed before anything was created and is supreme over all creation, for through him God created everything in the heavenly realms and on earth. He made the things we can see and the things we can’t see— such as thrones, kingdoms, rulers, and authorities in the unseen world. Everything was created through him and for him. He existed before anything else, and he holds all creation together. Christ is also the head of the church, which is his body. He is the beginning, supreme over all who rise from the dead. So he is first in everything.”
[Colossians 1:15-18]

Paul would encourage us to refrain from sleeping with the enemy and his teachers, by filling our heads with Biblical Philosophies perverted by false teachers. Verses like Proverbs 11:27, 26:27, and Psalm 7:16 may give an indication of some sort of Karmic influence, but “the rain falls on the just and the unjust,” and we need to remember that the Proverbs are generic life advice, but they’re not always the guaranteed outcome, while a lot of the Psalms are allegorical in nature.

I’ve spoken quite extensively about “not reading the Bible in black and white.” For we know that in the last days, many “false teachers,” will go out into the world. These are people who have no interest in learning the ways of the Lord, rather, they would try to compromise the philosophical teachings of the Bible, leading them astray to any believe that isn’t rooted in Jesus, even going so far as to use the very Bible that tells us of his life and only teaching from it at face value.

We are the bride of Christ, the “Karmasutra” or any other position of perversion isn’t meant to be a part of our spiritual lives.